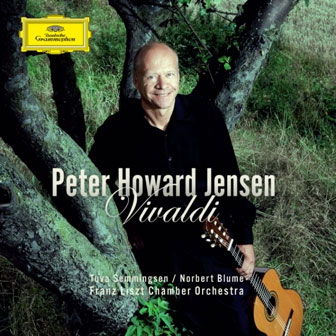 Rolla and Blume revisit Vivaldi with Jensen on guitar.

It’s striking just how vividly Vivaldi’s instrumentation – which dictates harmonic voicing and texture and melodic shape and compass – reads against variant of the ritornello form much favoured by the composer. Nevertheless, preserving original instrumentation for the sake of an often spurious authenticity is less important than clearly expressing the underlying musical logic, preferably with due deference to both historical and contemporary performing conventions.

It’s been just over 20 years since violinist and conductor János Rolla, violist Norbert Blume and the Franz Liszt Chamber Orchestra joined guitarist John Williams for the Sony recording titled ‘John Williams plays Vivaldi concertos’. Now they revisit many of the same works, this time with Danish – born classical guitarist Peter Howard Jensen replacing Williams. The earlier recording is a hard act to follow: William’s playing is buoyant and incisive while the orchestra’s sound is appropriately transparent; a bonus is the inclusion of the Concerto for two mandolins, RV 532, performed on two guitars by Williams and Benjamin Verdery.

But Jensen, who in concert also enjoys performing guitar transcriptions of the works of Bach, Haydn and Schubert, has an immaculate technique allied with a full tone and brings to Vivaldi not only a restrained sense of drama but a sophisticated understanding of the tonal possibilities of the guitar in Baroque repertoire. This is apparent not only in the solo concertos, originally written for violin, but in the trios with Rolla, whose direction throughout is masterful and astute, and the D minor Concerto for viola d’amore and lute with the excellent Blume. And the bonus here? A gorgeous rendition by mezzo Tuva Semmingsen of ‘Sovvente il sole’ from Vivaldi’s serenata Andromeda liberata.

About the recording
In my recording of music by Vivaldi, where a guitar takes the place of the original lute or violin, I show the composer in many different moods and at many different stages in his career.

The earliest works represented are two concertos, the third and the ninth, from Vivaldi’s earliest published set of concertos, L’estro armonico, which was arguably the most influential musical publication ever to appear during the eighteenth century. It was published in Amsterdam in 1711 [seventeen-eleven]. Not only J. S. Bach but every composer of concertos who followed Vivaldi was indebted in one way or another to the structure, expression and style of these pieces. I try to reproduce on my guitar the dynamism and lyricism of Vivaldi’s original solo violin parts.

The next piece, chronologically speaking, is a remarkable aria that Vivaldi contributed ― both as composer and, presumably, as player of the solo part for violin ― to a serenata, or dramatic cantata, entitled Andromeda liberata. This was hastily put together in 1726 as a homage by a group of Venetian noblemen to a visiting cardinal from Rome, Pietro Ottoboni. Very unusually, the composition was entrusted to several local composers ― the Vivaldi expert Michael Talbot reckons at least five ― of whom Vivaldi was just one. His single aria, with its beautiful obbligato part, outshines anything else in the serenata and lingers long in the memory. This aria reminds us how gifted Vivaldi was as a melodist.

In 1729 Vivaldi paid a visit, accompanied by his father, to Austria and Bohemia. He was always eager to accept commissions for compositions from the amateurs he encountered, and did his best to match the pieces he wrote for them to their technical ability and musical taste. One such amateur, Count Wrtby, played the lute, and Vivaldi wrote a group of pieces for him, of which three survive: two trios for lute, violin and bass and a concerto for lute and strings. These charming pieces all show how Vivaldi’s style had moved on in the two decades since L’estro armonico: they are light, conversational and intricate rather than heaven-storming.

Just before Vivaldi embarked, in 1740, on his final visit to Vienna (from which he never returned) the Ospedale della Pietà in Venice, the charitable institution at which he had taught, off and on, for almost four decades, asked him to compose a small group of orchestral pieces. These were to act as interludes in a serenata by another composer offered to the visiting crown prince of Saxony-Poland. Since one purpose of these pieces was to show off the range of different instruments mastered by the all-female members of the orchestra, the three concertos provided by Vivaldi all employ ‘novelty’ instrumentation. The concerto recorded here has two soloists: a viola d’amore and a lute ― appearing, perhaps, for the first and only time in musical history as solo partners. This is Vivaldi in his ‘late’ style, where one catches a whiff of the galant musical language introduced by such composers as Domenico Scarlatti and Pergolesi.